I’m writing this from my bed with a mug of wonderful tea beside me. I consider this a huge accomplishment. No, not because I managed to walk across my dorm and not spill hot tea on myself, but because it is 12:13 am, and I’m actually showered and laying in bed RELAXING. This is so rare for me that I can’t remember the last time it happened.

For those of you who don’t know, I’m an editor for my campus newspaper. That means on Wednesday nights—affectionately referred to as BV Wednesdays by the editorial staff—we spend the night (starting at 7pm) in the newsroom editing, doing layout, formatting pictures, etc. It’s a lot of fun most of the time, but some nights we just run ridiculously late, and I have an 8:30 am class…so I don’t like being there past midnight—especially when I have to go back to my dorm and shower and do stuff.

However, not only did we finish both pages of edits (from the Managing Editor Nate and the Editor-in-Chief Kevin), but I was back in my dorm by 11:30. Finishing both pages of edits means that I won’t have to go down and spend hours in the newsroom tomorrow like I normally do. HALLELUJAH. Another great thing about tomorrow? My 8:30 am and my 2:30 pm classes are cancelled! Now, those are my two favorite classes…but this means I only have one class tomorrow, I don’t have to go down to the newsroom, and life is just good.

So I’m celebrating by relaxing for the first time in God knows how long.

A day in the life.

Well, I’ve been back for a day now. I miss the city. I love wandering the streets and watching everyone live their lives as if the world would end tomorrow and this is the last night they have on Earth to party their asses off and have the time of their lives. It’s beautiful.

Saturday afternoon, my classmates and I presented on a panel at theJoint Journalism and Communication History Conference at NYU. A guy asked me if I was a professor. When I said, “Oh, no, just a student!” He said, “Oh a grad student!” And I said..”Oh, uh, no…I’m a freshman.” He was surprised, but welcomed me and was impressed I was at such a conference so early in my career. Made me feel special. So yay.

On the walk back to the hotel, my friends and I saw a dead guy laying on the corner near Broadway (I think it was near there. My memory is failing me). Either way, this guy was clearly dead. Eyes open, pale, stiff, surrounded by NYPD, Elmo, Buzz Lightyear, and other costumed characters. He also had a wad of cash in his hand. If I had to guess, I’d say he OD’d. It was sad, but an interesting experience nevertheless.

Saturday night, my friend Elyse and I went for dinner at Tonic, a sports bar right near Times Square, and took a walk through Times Square and did some shopping. It was her first time in NYC and seeing her reaction to everything was great to watch. She loved it. She said she wants to move there one day. I bought a bunch of crop tops at Forever 21. I’m not thin. But I think I can rock it with a high waisted skirt. Come at me, bro. 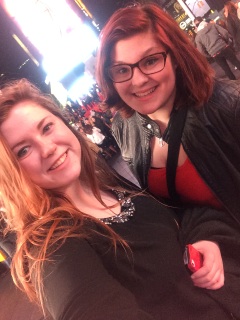 Oh, and we took some pics with a Mexican guy dressed as the Statue of Liberty.

He told us we had to pay in $5 each. On second thought, we should have just run away. I’m embarrassed to say we actually gave the guy $8. What the hell are we, tourists? Ugh. The aggravation.

Anyway, after shopping, I convinced Elyse to take a subway to Brooklyn for no reason whatsoever. She was not pleased when she found out I lied about subways going in a circle. I was happy to be on a the subway for no fucking reason. 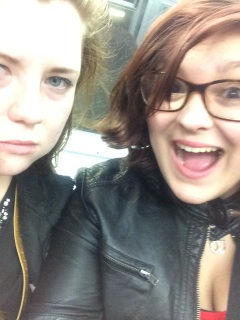 After we got off of the subway, we followed this girl and her friend around for awhile. Remember to keep a safe distance when stalking, folks. Don’t want to seem really creepy.

Yes. That is a unicorn backpack.

We ended up getting coffee somewhere in Brooklyn. I think the place was called Beans. And actually we didn’t even get coffee. We got raspberry lemonade. Still good.

We had no idea where we were. Somewhere in Brooklyn definitely. We went by a very large, pretty church. But I mean, that’s all we got. Somehow we made it back to Times Square and then back to our hotel, which was perfectly placed only about 2 blocks from Times Square. 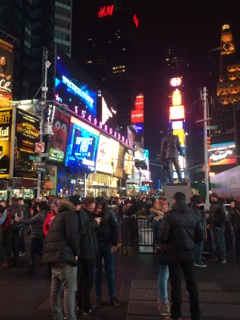 Sunday was a bore. Long car ride home. Dinner with friends at the dining hall.

Oddly enough, though a few people whom I haven’t talked to in forever (some it’s been years) wandered back into my life yesterday via Facebook and texting. The world has a strange way of working. Maybe I’ll write a post about that.

A day in the life.